Termites: An In-Depth Look At These Wood Destroying Pests

Insects come in all sizes, shapes, and colors. It is safe to say that they are all labeled as pests. However, there are some insects that go beyond being a normal pest to being an insect of destruction. The termite is a destructive leader among all pests and one not to be ignored. The cost of the destruction as well as the treatment of these silent destroyers can reach billions of dollars per year. 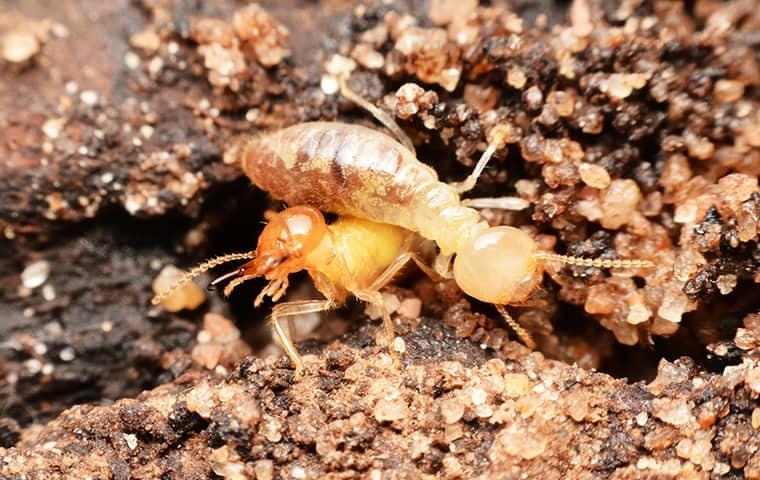 There are a variety of termite families in existence today, each of which has several subspecies. The Dampwood termite is one of the smaller families and can be a real nuisance, but compared to other termites, the Dampwood doesn’t pose as much of a damaging threat to buildings. They feast more on damp rotted wood rather than dry wood structures. The Dampwood termite has a vast need for water. This moisture requirement drives the Dampwood termite to search for wood in very moist areas. This will include any wood-to-soil structure, wood that has been exposed to water leaks for extended periods of time, or other wooden structures that are exposed to constant moisture. Wooden fence posts are also a common habitat for the Dampwood termite. It is good to note that the Dampwood termite infestations can extend into dry, sound wood as long as it is close to an ample source of moisture. Once the source of moisture is removed or dried up, the colony will gradually die off succumbing to desiccation. Dampwood termites are more likely to be found in the Pacific Coast states and southwest United States and Florida.

The Drywood termite is quite difficult to detect. They are seldom seen and build their colonies deep inside solid, dry wood. Only during times when they swarm or if uncovered by repair work of the home, will the Drywood termite be seen. They don’t develop huge colonies like some other termite species and usually are less than 1000 individual termites. However, they can be widely dispersed throughout the house taking years to mature. The Drywood termite does not tolerate freezing temperatures and for this reason is more common in the southern states. However, they can easily be transported to northern climates in shipments of lumber, crates, or wooden structures.

Considered to be one of the most aggressive and economically devastating termite species in the country, the Formosan termite is a very invasive species and has been transported worldwide. The Formosan termite was established in the United States in the 20th century. This aggressive and destructive termite can devour wooden structures, ships, and even utility poles. A nest of Formosan termites can contain millions of these relentless insects and cause major damage to homes and buildings in a very short time. The Formosan termite can forage up to 300 feet in soil, creating a danger for all nearby trees and wooden structures in it’s path. When you consider a colony of perhaps several million termites that can travel several hundred feet underground, it is easy to see that once established the Formosan termite colony is almost impossible to totally eradicate.

The Subterranean termites are perhaps the most damaging and destructive insect pests of wood in the United States. They are actually beneficial in nature because they break down cellulose into usable nutrients and are then recycled into the soil as humus. However, problems are created when they attack the wooden structures of homes and businesses. The Subterranean termites live in colonies under ground and have three primary castes: workers, soldiers, and reproductive members (kings and queens). The worker is the group that feeds on the wooden structure and causes damage to the building. The workers also supply the food for the other members of the colony. The Subterranean termite is the most common and dreaded termite found in North America.

With the approach of spring, residents of Long Island and greater New York State will see a resurgence of termite swarms. In fact, throughout most of the United States swarms of termites will begin surfacing. A swarm occurs when young termites transform into nymphs with wings. They then mature into active males and females. These maturing nymphs are referred to as swarmers. When spring temperatures and rains begin, these swarmers will leave their nest in large groups. During this process, swarming termites will mate and create new nesting sites and food sources. The newly matched couple will then burrow into the ground and this new royal queen begins laying numerous eggs creating a new colony.

Anyone who witnesses these swarms will become increasingly aware of the dangers of termites. Not only do termites cause billions of dollars of damage each year in America, but they go unnoticed and undetected for years! These silent destroyers are doing their damage while hiding behind walls, under floor coverings, behind insulation, and other obstructions. It is easy to realize how destructive they are when you understand that one single termite colony can have hundreds and even thousands of individual termites ravaging your home. It is possible for one colony to consume 16 grams of food (wood structure) per day while you are totally unaware they exist in your home. That computes to approximately 13 pounds of wood per year that is being eaten by these aggressively destructive termites.

The danger of termites is increased by their ability to hide and do their damage while going totally unnoticed. Homeowners, once they become aware of the presence of termites, are highly unlikely to be able to exterminate an entire colony because of not having the expertise or equipment needed to expose these evasive creatures. This calls for the need of professional exterminators to be called in and eradicate the entire termite population.

While the most feared danger of termites is the severe damage to your home or business, there is also the danger of destroying trees on your property. There is yet another risk that comes from the subterranean termites. This species of termite usually builds their nests under houses or business structures. They burrow into the soil under these buildings, thus acquiring the name subterranean. In the process of building the habitat for their huge colony, holes and tunnels are dug in the ground. This can cause enough cavities in the earth to weaken the ground supporting the building structure. Once enough of this weakening of the soil happens, it will create a settling and shifting that can cause cracks in the drywall and the floor and of the building invoking yet another unexpected expense.

The danger and destruction of the termite has caused more than one homeowner to fear an infestation of termites when in actuality, it was nothing more than pesky ants. The winged ant and termite are both referred to as alates. The alate is simply the adult, sexually mature stage of the life cycle of the ant or termite. However, there are at least three distinctive ways one can identify and tell the difference between a winged ant and a winged swarming termite. The antennae are very noticeably different. The winged ant has a 90-degree elbow shaped antennae while the antennae on the winged termite are straight and beaded. The wings are another area of distinction. With the winged ant, the fore wings are noticeably larger than the hind wings. The fore and hind wings of the winged termite are of equal size. The third area of distinction is the body shape. The winged ant has a constricted waist and the winged termite has a broad waist. Viewing these three characteristics will enable you to determine if you have a pesky flying ant invasion or a dangerous invasion of termites.

The safest and surest way of determining whether there is a presence of termites is to employ a licensed termite inspector to do a thorough inspection prior to purchasing any real estate. Anyone who is already a homeowner, and has any concerns whatsoever, should contact a pest control specialist to do a complete analysis of your home. Your inspector should view all visible and accessible areas of the home including the basement, foundation structure, garage, crawl space, attic, and outside areas of the structure. Using his experience, knowledge, and observations of your home, the inspector will give you a report of his findings.

In the event that the inspector finds any sign of termites, he will offer his recommendations for the various treatment methods for eradicating the termites. The method of choice will vary depending on which species of termite is present in your home or business. For example, the Subterranean termite treatment options may include a liquid application, like Termidor®, at points of entry and monitoring stations and bait stations throughout the home. One of the most widely used termite monitoring and baiting systems is the Sentricon® Termite Colony Elimination System. Drywood termite infestation will call for a direct treatment of the wood. This is odorless and immediately effective while offering protection against future termite infestations. The Drywood termite treatment may also call for the entire structure to be fumigated.

I have been a Parkway client since 1992. I write today because I have been pleased with the services that Parkway provides for years, but yesterday, your inspector Habib was so diligent, professional and courteous that I wanted to express my praise for Parkway's servcices in writing. From my experience over twenty years' time, Parkway always has been extremely responsive: from appointment scheduling services to on time performance. You should be proud of Habib's professional. I intend to be a Parkway customer for the next two decades.