What Is Behind The Recent Yellow Jacket Surge In New York?

from 454 reviews. Read All Reviews

Home › Blog › What Is Behind The Recent Yellow Jacket Surge In New York?

Yellow jackets are never a pleasant guest to have. Their stings can be painful and their very presence can put people on edge, ruining whatever experience you’re hoping to find outdoors. Whether it’s a pool party, picnic, or any other outdoor activity, yellow jackets put everything on hold.

Luckily, with summer drawing to an end, at least we’ll be seeing less and less of them. After all, stinging insects like yellow jackets are only a problem in the summer, right?

Wrong. Unfortunately, if you’ve started seeing a resurgence of yellow jacket activity around your property, the worst could still be yet to come. In this blog, we’ll take a look at why. 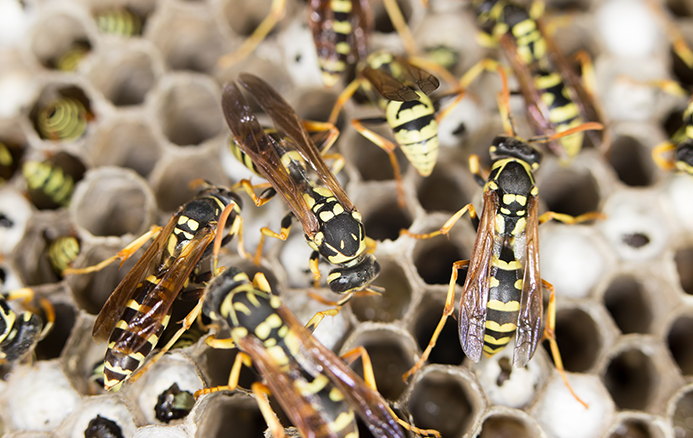 Yellow jackets are social stinging insects that live together in colonies. Yellow jackets are 3/8 to 3/4 of an inch long, with distinctive black and yellow banded abdomens that give them their name. They are distinguishable from other wasps due to both their smaller size, brighter yellow coloration, and their body structure with wider abdomens and shorter legs than the typical wasp.

The problem with yellow jackets is that they are fiercely territorial. While they are not always aggressive and can sometimes be best avoided simply by ignoring them, they will become more and more aggressive if they feel that you are a threat to them or to their colony. If a colony exists in your yard or around your home, you could easily aggravate them without even meaning to.

Why Do I Have Yellow Jackets?

There are many reasons why New York homeowners may find these yellow jackets on their property. Under soffits, behind shutters, and in gutter systems all present great places for yellow jackets to build their nests. These are the areas where they are most commonly encountered, especially in warmer months of the year.

But what about now, as the weather cools? Unfortunately, yellow jackets aren’t done. In fact, they’re about to get a lot more active - and a lot more angry.

Yellow jackets have to find food in the wild to survive, and that food starts to dry up in the fall and into winter. Making matters worse, the queen of the colony has been laying eggs all spring and summer, so by the time fall arrives, the colony is at its peak capacity - meaning lots of mouths to feed.

Yellow jackets can also stay active in colder weather longer than many other bees and insects can, which contributes to an increase in stings in fall.

Threatened with starvation, yellow jackets become much more aggressive in search of food, and they’ll sting anyone or anything that they perceive as being in the way. If their colony is built around your home, that could very well be you.

How Do I Get Rid Of Yellow Jackets?

Getting rid of yellow jackets on your property can be a very difficult and dangerous task for homeowners. Just tracking down their colonies can be difficult, and all the while the closer you get to the source, the greater the risk that you get stung.

Thank you for your continuing good service!