A Look Into The Lives Of Bees, Wasps, And Hornets

Home › Blog › A Look Into The Lives Of Bees, Wasps, And Hornets 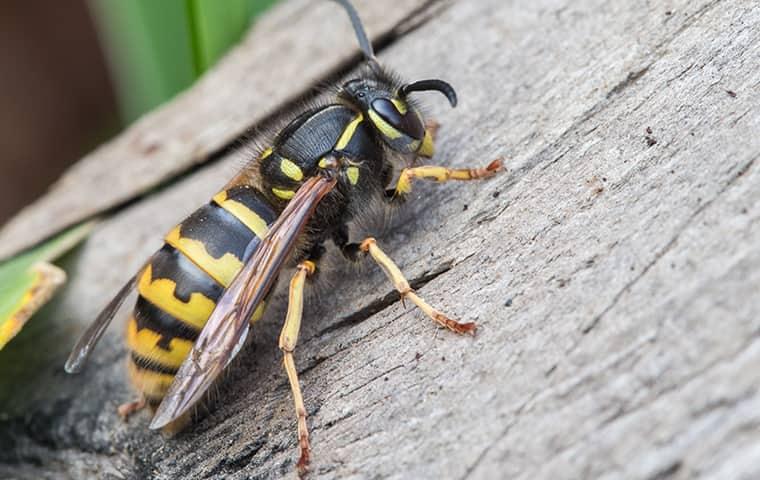 There are many household pests that bring unpleasant thoughts to the homeowner; termites, cockroaches, rodents and carpenter ants just to name a few. However, stinging insects fall into a category of dread, discomfort and even danger. They are often overlooked and not considered to be a threat to humans yet more than one half million people are sent to the emergency room each year as a result of a sting from a variety of insects.

These insects are very active during the late summer and early fall. It is during this time of year that the colonies are aggressively foraging for food that will sustain their queens during the winter months. The number of pests that make up the stinging insect category is quite extensive. Many of these insects actually have merit and are beneficial as they are very helpful in the control of spider populations and other insects. Some of the more common stinging insects are bumblebees, wasps, hornets, honeybees, yellow jackets, cicada killers and ground bees. Any one of these stinging insects is capable of setting off a serious allergic reaction that would require immediate medical treatment. It is important to be able to recognize these pests and know the dangers that accompany their sting.

It is believed that there are more than 200 types of bumblebees in existence with at least 50 different species in North America. Each different type of bumblebee will have its own preference of nectar and even a preferred type of flower. They are very beneficial insects as they are constantly pollinating plants and flowers while foraging for food. While busy foraging and pollinating, the bumblebee is rarely a threat, even when in close proximity to people. If anything, they will go out of their way to avoid contact but will defend themselves if cornered or threatened. The preferred nest for bumblebees is usually on the ground, underneath a flat object. However, this nest is only used one season. When the queen bee comes out in the spring, she searches for a new spot to build a nest and start her new colony.

There is a plethora of species of wasps throughout the world. Most of them are of the non-stinging variety and do much more good than harm with their control of other pest insect populations. They are so adept at controlling other pest populations that they are now being deployed in some places for the purpose of protecting crops from harmful insects. Wasps are very easy to distinguish from bees with their narrow waist and lower pointed abdomen. The wasps all build nests using a secreted, waxy substance in which to construct the nest.

Each species of wasp will belong to one of two groups; social or solitary. The social wasps only account for a small number of wasps but include species like the yellow jackets and hornets. Solitary wasps make up the largest groupings of wasps and include species like the cicada killers. Unlike social wasps that use their stinging ability for defense, the solitary wasp uses their stinger and venom to hunt and capture other insects.

The cicada killer wasp is exactly that; they paralyze the cicada with their venom and drag it to the nest to feed their grub-like larvae. Even though the sting from a cicada killer wasp is quite painful, they are not aggressive and do not have the guarding instinct like that of honey bees and hornets. The male cicada killers do not have a stinger and are harmless but are territorial and will hover over people who get close to the nest. Their appearance and buzzing sound is enough to deter just about anyone.

The honey bee is perhaps the most common and well known of all the stinging insects. Most people have been on the receiving end of the honey bee stinger at some point in their life; usually accidentally stepping on one while barefoot. The honeybee is of the social variety and lives in a nest called a beehive. They are noted for the honey and honeycomb they produce. The hive is ruled by a queen bee and can have a hive with as many as 80,000 bees. The commercial honey bee industry has become quite large with the demand for honey and beeswax. Because they’re so beneficial, honey bees should always be removed by a professional beekeeper who can successfully remove the bees but keep them alive.

A stinging insect will inject a type of venom into your skin that can cause various degrees of pain as well as setting off an allergic reaction. Both the pain of the sting and the allergic reaction varies greatly and is dependent on your sensitivity to the venom as well as the number of times you were stung.

Most people only have a mild reaction to insect bites. Normally that amounts to little more than a stinging sensation and annoying itch and perhaps a mild swelling around the sting. Some people experience an additional delayed reaction that could include a mild fever, hives and even painful joints. Very few people develop severe reactions to the venom of insects. The symptoms associated with severe reactions include nausea, swelling of the face, difficulty breathing, abdominal pain and even a deterioration of blood pressure and shock.

The most severe reactions are often from bees, wasps, hornets, yellow jackets and fire ants. A mild reaction can normally be treated without medical attention. The following steps will bring relief to the individual who has a mild reaction:

Allergic reactions may be accompanied with intestinal cramps and diarrhea. Contact medical personnel if any of these symptoms occur or if excessive swelling takes place. The occasional reaction beyond the pain and discomfort from itching will have much more serious symptoms and will affect more than just the bite. These symptoms can progress very rapidly and will warrant a 911 call for emergency medical assistance. Again, these symptoms can include breathing problems, swelling of the throat or lips, dizziness, fainting spells, confusion, hives, nausea, cramps, vomiting and rapid heartbeat. While these symptoms are extreme and rare, the above steps may be enough to thwart off life threatening conditions while waiting for medical emergency personnel to arrive.

Considering the potential danger from stinging insects, it is prudent to do all you can to prevent a population explosion of these pests on your property.

These routine guidelines will greatly decrease the risk of being stung by these insects. However, after using all caution and prevention tips, contact pest control professionals if stinging insects are still flying around your property or getting inside your home.

Just wanted to thank Parkway for running over after the storm when I had critters in the attic. Al and Puneet are awesome. They are a pleasure to have in the house and as a 20 year customer of Parkway wanted to say thank you for taking my fear so seriously and getting someone over in bad conditions. If only our utility companies were as responsive.